Come now, let’s go enjoy the snow until we tumble down

季語 kigo seasonal words - Within the poem, at least one word or phrase should symbolize one of the four seasons.

切れ字 kireji cutting words - These are small words that often function as a placeholder so the verse has the right number of moras.  They also function to give a certain emotional or sentimental flavor to the poem.

Come now, let’s go enjoy the snow until we tumble down

(Meaning) Hurry up, let's go see the snow-clad scenery! Until we get our feet caught in the snow and we fall down. It conveys the feeling of the author who is excited to see the snow piling up.

What is the 季語【きご】？ It is 雪見【ゆきみ】 (snow viewing) which makes this a winter poem.

You've surely heard of 花見【はなみ】 where Japanese have picnics under the falling cherry blossoms in the spring. And in the fall, there is 月見【つきみ】 (moon viewing). And in Edo (modern day Tokyo) where it didn't snow much, people also enjoyed viewing snow in the winter.

This poem was written in 1688 and revised over the next year by Basho. 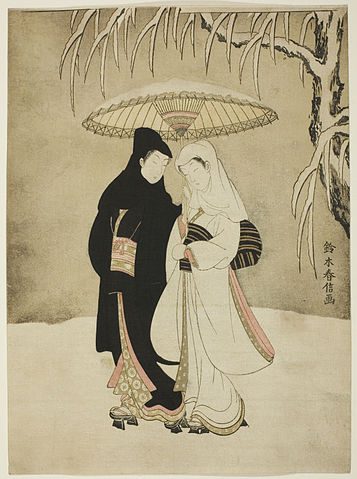 Two Lovers Beneath an Umbrella in the Snow, Color woodblock print by 鈴木 春信 Suzuki Harunobu

Could this be Basho inviting a young lady to frolic with him in the snow? It's certainly a playful image. Let's go run through the snow, hand-in-hand, totally free of care... until we tumble and fall.

It's childish and silly but perhaps a little romantic too. Let's have fun in the snow, just the two of us. The vast, silent snow blankets and shields us from anyone else. There's no one in the world but us two.

Basho was about 43 when he wrote this. He was a fully-grown adult. But perhaps he met somebody new and felt a sudden rush of youthful playfulness despite his age.

At any rate, he is asking someone to rush in the snow with him. The いざ that starts the poem may indicate a sudden idea that popped into his head. He wants someone to stay with him until they both slip and fall with laughter (indicated by the ころぶまで).

He could be talking to a child and wanting to accommodate that child's desire to frolic in the snow, but perhaps more likely he is infatuated with some lady and has become a child again in his heart.

Note how the haiku begins with the call to action. いざかん! Well now, let's go! And ends with his real purpose (maybe), to playfully fall down in the snow with his lover.

Matsuo Basho (1644-1694) is undoubtedly the most famous of the classical haiku poets. His mastery of haiku and his wanderings around Japan are attested by the many monuments with his poems.  His most famous collection of poems and writings is called, "Oku no Hosomichi."  It was written while on a long journey in Edo Japan in the spring of 1689.  Today many people trace his footsteps for themselves.